The Value of Books: A Dedication to My Mother. Her birthday is January 31, she would have been 93. 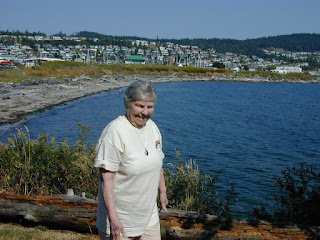 One of my first early role models as a child outside of my family and my first book read as a child was a biography titled “Jane Addams Little Lame Girl”. The book was part of a series of books my mother would buy for us every week. They were offered for a time at the local grocery store. This one was written by Jean Brown Wagoner. The collection was titled Childhood of Famous Americans.

In high school I did written reports about her life’s work from her autobiography titled, “Jane Addams, Twenty Years at Hull House”. Published in 1910. Part of my MA thesis was related to her influence on my life, along with many others. As I reflect now I feel gratitude to my mother for her efforts in building a little library of books for her children over the years. Reading was difficult for me. As a young child I had a speech therapist and was in special reading programs through middle school. I had many unkind and unfavorable experiences from teachers throughout my school years unfortunately. I believe these experiences and my learning disability is what attracted me to the alternative and transformational work of Dr. Montessori. I was always struggling to keep up. I now realize it’s what led me to persevere through my years of study at Pacific Oaks College to receive my MA in human development, with three specializations in education and parenting, at the age of fifty. Working in the field of mental health, receiving my license and supporting families, struggling with ever so much. To then become an educator at the community college, sharing my life’s work of supporting children and adults in learning to read and fall in love with their own individual curiosity for learning and creating for themselves. Just as my parents lovingly did for me actually. This site on the Hull House museum and the women’s history site both describe Addams work as an advocate for peace and her work with immigrants, which began in her home, and would later become “Hull House” in Chicago.

“Jane Addams wrote articles and gave speeches worldwide promoting peace and she helped found the Women's International League for Peace and Freedom in 1919, serving as its president until 1929 and honorary president until her death in 1935. She was awarded the Nobel Peace Prize for her efforts in 1931, the first American woman to receive the award. She also wrote a book about her work at Hull House, as well as other books promoting peace.”

Posted by Connie M Britt at 7:16 PM No comments: 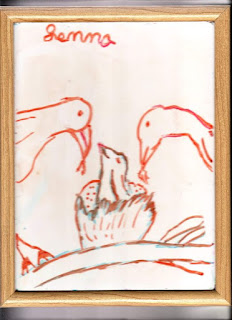 I first learned about Dr. Maria Montessori in 1970 after the birth of my first daughter. I fell in love with her writing and understanding of children. I purchased all of her books. I learned about observation and the prepared environment. Montessori wrote that the things a child sees within their environment are not just remembered but actually form a part of the child's soul. My discovery of Dr. Montessori led me to complete the written and practicum course work necessary to receive my certification as a Montessori Teacher for children ages 2-6. It began with my children, both my young daughters were taught at home using the Montessori principles. Many of the materials I made as part of my course work, some I purchased. My daughters were reading when they entered kindergarten. My work grew to developing a child development program in my home for children. During that time I completed my bachelors degree in human development at Pacific Oaks College and later went on to complete my master degree and several more years of further education and certification leading to my work as an educator and mental health counselor.
As a young child our grand daughter called the materials used in my daughter’s home schooling program "mommasorri tools". She was six when she drew this sweet baby bird being lovingly fed by it’s parents.
“An education capable of saving humanity is no small undertaking; it involves the spiritual development of man, the enhancement of his value as an individual, and the preparation of young people to understand the times in which they live.” Dr. Maria Montessori.
Posted by Connie M Britt at 6:56 PM No comments: 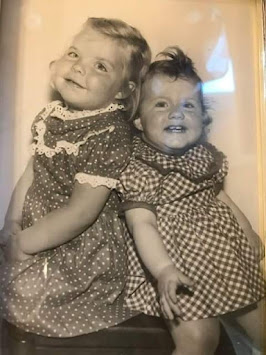 My sister Diana on the right, her birthday was January 18th. I miss her, her humor, her laugh, her frankness in not letting me get away with anything. She passed away from a heart attack in 1995. I have wonderful memories of camping trips as a child. We would do sketches for the family and sing together around the evening campfires built by my father. Swing Low Sweet Chariot, and the funny song titled Found a Peanut. We learned them in Girl Scouts. We would sell cookies and earn money to go to Girl Scout camp together. Four hours on a greyhound bus to the mountains of the Stanislaus River, a tributary of the San Joaquin River in north-central California. We went two years in a row when we were pre teens. Diana would imitate the wonderful comedian, Red Skelton, and have us all in stitches. These sweet little dresses we are wearing were made by my father. He was a Singer sewing machine salesman for a time and made these for us. He would travel from farm to farm in Colorado, where Diana was born and my mother and grandmother as well. Dad told me he would ride on the back of the farmers tractors selling sewing machines for their wives. He also had a great since of humor. They both loved telling jokes as well as watching movies and after going to a drive-in movie, which we did often on Friday nights, would capture the movie plot in great detail describing the characters to anyone in the family that would listen the next day.
Happy Birthday dear sister. I love you.
Posted by Connie M Britt at 6:37 PM No comments:

Welcoming 2022 with an Open Heart

As we say goodbye to 2021 I have few words to express the losses and daunting trials our world has faced. And yet hope shadows the heart within the glistening window of God’s Grace. These are extraordinary times we are witnessing. We are all effected in different ways from the extreme circumstances we are faced with right now. My dear friends in Colorado had to evacuate their home yesterday due to the crushing fires in the Boulder and Denver areas. No word about their safety or their home they had to abandon as yet. Our prayers and love are with them. We all know the weather patterns are unpredictable and uncertain at best as evidenced by the icicles here, the recent floods in our area and the extreme heat domes this past summer. We have continued record cold here with more snow throughout the coming days.

In 2022 may we continue to hold onto each other in all the creative loving ways we’ve learned to do these last two years to stay together, stay in touch, while continuing to protect ourselves and others through all the necessary safety precautions needed to get through the other side of this covid pandemic that has taken so many lives and caused infinanate levels of dispair.

I have continued heartfelt gratitude for all the frontline workers and each and every person serving the public to provide for our needs. May the exhaustion we are all experiencing in one way or another give rise to glistening rays of hope and may our courage continue to guide our hearts in our love and care and support for each other Welcoming this New Year with joy, compassion, understanding, guidance, and gratitude for each other, in what we might accomplish together and in what is yet to come. 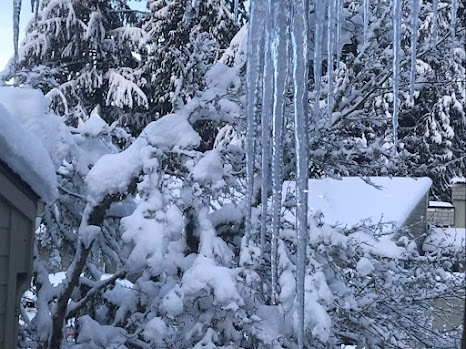 Posted by Connie M Britt at 5:09 PM No comments:

Reflections on The Fabric of Family Taditions

I’ve always made window curtains, not sure why, its not a past tradition in my family that I'm aware of, however my grandmothers were certain to have made curtains for their homes. This curtain fabric, which was for a costume actually, I ordered from a very wonderful and reasonable cloth making company in Varanasi, India. I remember corresponding by email with the owner who was so kind.  It arrived in a cloth wrapping like many packages sent from India instead of a box or paper. The burgundy ties are remnants of garlands I bought in the Hadar or market place in the city of Haifa, Israel. I was visiting my daughter who was serving at the Baha'i World Center at the time. The dragonfly and hummingbird attached on either side of the curtain panels are anniversary gifts from years ago. I save fabric from the various things I have made over the years including all of the baby blankets I have made for my grand children and grand nieces and nephews. My grandmother, Dee Dee Mom, saved fabric to make quilts for her family and for her grandchildren. She was a true quilter. I used to stand with her in her living room along the quilt blocking posts where the quilts were hung from, helping her tie off her latest quilt when I would have sleep overs at her house

So...there is actually tradition that I somehow now re4cognize nad have rediscovered.This photo has helped me remember a precious family tradition.

Posted by Connie M Britt at 4:48 PM No comments: