A Memorial for my father: Orville Eugene Bonner 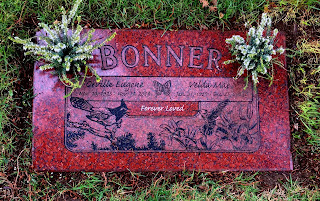 Mom and dad’s remains were interred on December 31, 2018, at the Grandview Cemetery in Anacortes. A gravestone was ordered from Evans Funeral home at the end of November and will be placed at the site as soon as it is completed. We are very grateful to all of you for your support and love and efforts to communicate and visit with dad from wherever you were in the final days and hours of his life. We respectfully thank Harbor View Hospital and specifically Dr. Allison Brusati, and the nurses for their care and compassion during dad’s final days. Mom and dad were both members of the Co-op Funeral Home of People’s Memorial Services, and we appreciate the quality of their services.
Two sons, Ed Bonner and Robert Bonner, a daughter, Connie Bonner-Britt, seven grand children and fifteen great grandchildren, three nieces, and a nephew survive him. His wife Velda passed away December 25, 2015. He survived the passing of his father, mother, and two brothers and a sister. Two daughters, Diana Bonner, and Barbie Bell, passed away in November of 1995 and January of 2000 respectively.
There is much I could write about dad as his oldest daughter, but he pretty much did that for us with his own personal stories and poems. As we very lovingly say farewell to him we know he is now reunited with his beloved and his two daughters Diana and Barbie, and all of his relatives. Here is what I could capture as I was able to over the last many weeks since his passing. I know each one of you have your own thoughts and prayers and stories and I encourage you to please share them as well.
Orville Eugene Bonner passed away November 14, 2018 at Harbor View Hospital in Seattle, Washington. He was born November 10, 1925 in Tomas, New Mexico, to Audrey Mae Bonner and Charles Lee Bonner. He was raised in Dalhart, Texas. He was a son, brother, father, husband, uncle, grandfather and great grandfather. Orville was known to friends and family as Bob and to his grandchildren he was Gramps and to me he was just dad.
He served two years in the U.S. Navy from 1944-1946. He married his beloved wife, Velda Mae, June 25,1947. They bought a home and settled in Sunnyvale, California, raising five children. He was a self-taught carpenter, building thousands of fences in the Bay Area. He not only supported his family, but also provided jobs for both his brother Leroy and his brother-in-law Joe, while often working two jobs to make ends meet for his family. Dad liked taking his kids to the drive-in movies and the roller derby on the weekends, as well many other family outings, especially three-day holiday weekend camping trips on the Stanislaus River. In 1966 mom and dad moved to San Jose until 1974, where they bought and moved to “the farm” in Orosi, California. They then moved to Folsom where they lived and worked at “the station” until 1997. There are many well documented photos that dad has of his work designing and building a number of gas stations over the years in Central California with my brothers, Rob and Ed.
Dad especially loved Christmas, decorating the house with strands of colorful lights. One memory for me was when he worked the night shift for Sylvania Electric as a night watchman. When I was about seven years old, he dressed up in the company Christmas party “Santa Suite” after the employees had gone home, and delivered our presents at home to us on Christmas day. As a grandfather and great grandfather he still sometimes dressed up in full costume as Santa.
Dad will be most remembered for the cherished work he did preserving family photo albums. He extensively documented his life with his beloved through photo albums and movies throughout their lifespan together. During the past 24 years of his life, and after retiring and making their home in Anacortes, Washington, dad documented their life together through writing stories and poems of his life. I know this was very healing work for him. Up until his final weeks Dad was writing to his loved ones and painstakingly creating photo albums for each one of his children and grandchildren and their families. After mom passed he was always busy sending a birthday card or a special gift to grand children and great grand children. Making sure each one knew how much they were loved and thought about each day.
There will no be a formal memorial. Each one of you very lovingly visited mom and dad often over the past several years and for that they have been grateful beyond words. Gathering in their name will always be something we can look forward to planning in the future if at anytime any of you wish to travel this way. Dad’s photo albums have been organized for each of you. If you would like them mailed to you please let me know. Otherwise they are here for you as dad wanted and planned as his final and cherished gift to each of you.
May each one of us in our family continue to love each other in the ways we were taught by both mom and dad. As they shared their life’s lessons with us through their laughter and tears, hardships and strengths and weaknesses, may we continue to pass on their precious love through sharing our stories together with each other.

An old Cherokee is teaching his grandson about life.
“A fight is going on inside me,” he said to the boy.
“It is a terrible fight and it is between two wolves. One is evil he is anger, envy, sorrow, regret, greed, arrogance, self-pity, guilt resentment, inferiority, lies, false pride, superiority, and ego.” He continued, “The other is good – his is joy, peace, love, hope, serenity, humility, kindness, benevolence, empathy, generosity, truth, compassion, and faith. The same fight is going on inside you and inside every other person, too.” The grandson thought about it for a minute and then asked his grandfather, “Which wolf will win?”
The old Cherokee simply replied, “The one you feed."