My Journey as a Montessori Educator 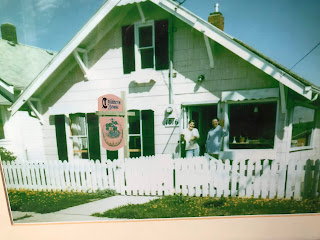 As a Montessori educator of young children, from 1976-1997, I am ever grateful for what she taught me. I received my Montessori Certification when my daughters were four and six years old. Dr. Montessori’s teachings gave me a deep understanding of my life’s purpose as a young mother, and I grew this purpose to not only continue to raise my beautiful daughters, but also to serve as a door for me to serve the many children we were blessed to care for during my years serving families in our in-home child care program which later grew to become “Children’s House Child Development Center.” In 1997 I was working on my Masters degree and sold the program to begin my career as a child and family mental health counselor. Thank you to the extraordinary teachers, Liz, Melanie, Penny and my dear Emily for their tireless work and love offered up to the many children and families we served over those years.

Here is a short bio of her heroic life as she fought for her educational rights, as she was forced out of Italy and yet she carried on her work as a doctor specializing in psychiatry and children with special needs, carrying her teachings and her beliefs to other countries. She stood In behalf of children during the horrendous trials of political tyranny of her time. Today in 2019 he definition of tyranny in the dictionary is “cruel and oppressive government or rule.” Today the, this act US putting 15,000 children in camps under the guise of homeland security falls under this definition. At the very least we must stand for these children and vote, volunteer, and work together in their behalf.

“How Maria Montessori Defied Mussolini and Changed the World.
For International Women's Day, we celebrate the life, grace and indelible contributions of Maria Montessori.

Maria, a beautiful and young Italian woman, stood at the doorway of her future — one of Italy’s medical schools — eagerly waiting to enter, only to be greeted by unfriendly students and professors, muttering, “Che vergogna,” for shame!

Why the fuss? Well, it was once an all-male school, and now it was not! For young Maria Montessori, it was such an unexpected situation. All she wanted was the opportunity to be a doctor. Little did anyone realize that, in time, she would be internationally recognized for her renowned Montessori educational process and schools.

Maria was born August 31, 1870, in the town of Chiaravalle, Le Marche, Italia, to parents Alessandro and Renilde Stoppani-Montessori. It was not until Maria was 7 years old that Italy permitted females to attend public schools. Up until then, fathers and the Catholic Church decided the educational needs of Italian women. And, as it was, Maria’s father did not favor her attending public school, let alone the higher educational institutions. But headstrong Maria, “Con una testa dura” was not about to capitulate to the educational limitations imposed on Italian women, by Italian men.

Maria’s determination to get an education began when she was 13 years old when she enrolled in an all-boys technical school, where she had hoped to start her training as an Engineer.

She was not an extraordinary student, but did well in the sciences, especially with mathematics. However, by the time Maria completed the secondary level of schools, she decided she wanted to be a medical doctor.

Continuing (and about to break more barriers), Maria applied to the University of Rome Medical School. Unfortunately, she failed the entrance exams on the first attempt but succeeded in the second go around.There are reports that the Pope at the time, most likely Pope Leo XIII, had a hand in Maria’s acceptance into medical school.

One of the problems Maria faced with the male medical faculty and students was no one wanted her beside them when having to work on a naked cadaver! “Mamma mia, senzapudore” does she not have any shame, they whispered to one another. However, the enterprising Maria was not to be sidetracked from getting a medical degree, so she solved the problem by agreeing to do her dissections of naked cadavers, after regular class hours. Dr. Montessori was one of Italy’s first female physicians when she graduated medical school in 1896 and a trailblazer for other Italian women to pursue the same.

Maria’s early medical practice focused on psychiatry, specializing in working mostly with special needs children. Disturbed by the learning difficulties suffered by these special children, Maria set out to improve their learning capabilities. She established the first of her Montessori schools, in a ghetto of Rome, on January 6, 1907. “La Casa dei Bambini,” the Children’s Home, became the foundation of her Montessori educational system. So successful was the Montessori system, it spread worldwide. Later, Maria included regular students as well as the special needs children in the school system. Dr. Montessori gave up her medical practice to devote all her time to educational endeavors.

As the Montessori educational method grew in popularity, it attracted the attention of no other than Benito Mussolini. Mussolini became so enthused with the Montessori system, he agreed to serve as Honorary President of the Montessori Society of Italy. With the approval of Mussolini, Maria opened a teacher’s training college and a wide range of Montessori institutions throughout Italy. As the years went by, Dr. Montessori’s ideological viewpoints, mainly as a pacifist, clashed with the Fascist administration and her mutual relationship with Mussolini ended. The situation became particularly worse in 1931 when Maria refused to order her teachers to take the fascist loyalty oaths, as all teachers, government employees and professionals were ordered to do. Furious, Mussolini closed the Montessori schools, and by 1934 Maria fled Italy to escape political surveillance and harassment.

Maria Montessori lived through some tough times, but was a very determined, ambitious lady. She was teaching in India when Italy and Great Britain became embroiled in war. Then, in 1940, Britain ordered the internment of all Italian nationals in the United Kingdom and its colonies. India refused to confine Maria but limited her movements to the area of the Theosophical Society compound where she was teaching. Not able to return to Italy, Maria lived in exile, in India, for the remainder of the war.

In the United States, many Montessori schools are privately owned, and some are part of the public school systems, allowing more children to attend, regardless of the family economic status.

Dr. Montessori was an exceptional person. She has the honor and distinction of being the only Italian woman to appear on an Italian banknote.

Maria spent her final days, living with friends in Amsterdam, Netherland. She died on May 6, 1952, at the age of 81.”